We have acted out our own stories which we created in groups. 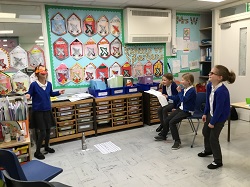 Our Maths has consisted of decimal numbers and moving onto money. The pupils have done very well at applying their previous learning to assist them.

Year 4 have continued to work hard on their Science with Mrs Hill. They have moved from the topic of habitats to changing states. The experiment that they conducted last week is shown on the picture below where pupils had various substances in plastic cups. 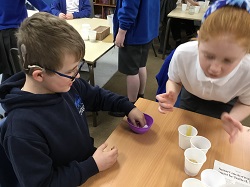 PE sessions have been focused on Tag Rugby and finishing off their Greek dance routines, as our Topic has continued to be Ancient Greece. They’ve all done a fantastic job!

“I’ve enjoyed learning about decimal numbers. I’ve really challenged myself and it will help me with money!” (Elsie I).

“We’ve learned about the Ancient Greek Gods and Goddesses and I really liked hearing the facts about them and creating my own!” (Ruby).

“I really liked learning about the Greek Myths. My favourite one is about the Gorgon Medusa and how she finally gets defeated! “ (Jake).

“It was very interesting when we learned about the three different types of Greek columns for their buildings and we sketched an example of these.” (Sophie).

“I liked creating my own internet safety poster and the class had a brilliant discussion on staying safe. We had to answer an email simulation which was fun!” (Phoebe).

“I’ve enjoyed our Science. We conducted an experiment which was really fun!” (Francesca). 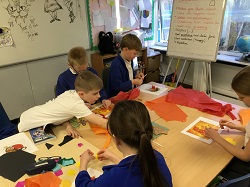 Back to the Year Four Blog Menu